Flutter vs. React Native: Which one is better for 2023? 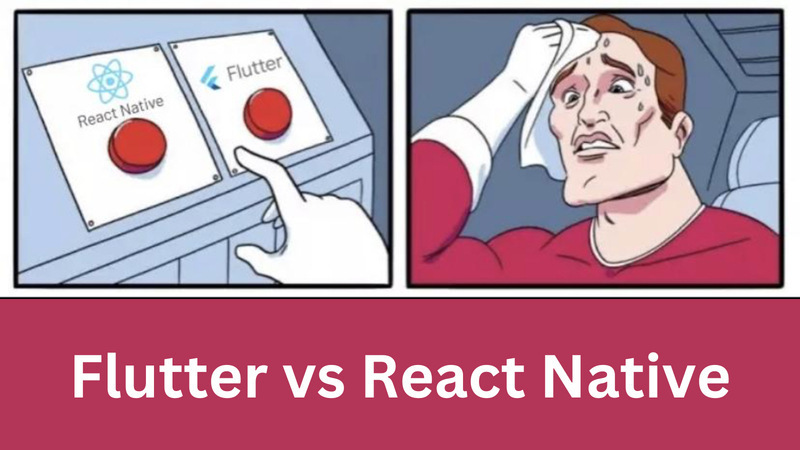 Both React Native and Flutter app developers are used in the creation of mobile applications. They contribute to the creation of interactive apps for iOS and Android. It is essential to comprehend their variances and pick the one that is best for you because they both serve the same goal. You can get assistance from this post on Flutter vs. React Native. Now that you are aware of what to expect, let's get started.

A cross-platform framework for creating mobile apps, Flutter app developer was created by Google. It provides programmers with a simple method for creating and deploying aesthetically pleasing, natively built applications for desktop, web, and mobile platforms (including iOS and Android).

What is react native?

In order to create user interfaces, React Native integrates the greatest elements of native programming with React. You can create mobile apps using only JavaScript thanks to it. You can get these mobile apps from the Apple Store and Google Play Store.

Both are cross-platform mobile frameworks with powerful user communities, a tonne of pre-programmed modules, and a tonne of features that can accelerate your development. But knowing the distinctions between Flutter and React Native will help you lay the correct groundwork for your upcoming project.

Language for Programming Dart and the Flutter Framework. In 2011, Google created Dart as the programming language for this framework. Many claims that Dart programming runs a tiny bit more quickly than React Native. It's difficult to criticize Dart's beautiful syntax. However, learning its object-oriented ideas can be challenging.

One of the most popular languages in the world, from website designers to software professionals, JavaScript is simple to create with. There are many tutorials available because JavaScript has such a large developer community.

It's simple to understand how this framework can help you save time and money when you consider the pre-built modules it provides.

The Flutter app developer framework makes use of a platform-specific shell, the Dart language VM, and the Skia 2D graphics rendering package. Dart's source code is beforehand compiled to produce native code. This idea is essential. Its code is a simple and quick fix that works with iOS or Android without any issues.

This framework utilizes Facebook's Flux architecture, but it needs a JavaScript bridge to be integrated. This annoying reality is a fundamental distinction between Flutter and React Native that causes app design to move a little more slowly than Dart.

React uses JavaScript as a bridge to connect to native components. The development and operating times are therefore slower than with Flutter.

The device's native components cannot be contacted since there is no connecting bridge. As a result, native component interactions are quicker, which enhances the application's overall speed.

General documentation is available for React Native. The framework heavily relies on outside development kits. It's not as simple to read the documentation as it is for Flutters.

Because of its structure and thorough material, it offers documentation that is simple to understand. Additionally, the documentation is simpler and better organised.

5. API for UI and Development

This framework largely makes use of its own unique development language. And as a result, Flutter and React Native provide quite different UI development experiences.

It is completely unique and uses its own widgets. And considering that the widgets are automatically consistent with Material Design for Google and Cupertino for Apple, this may very well be the framework's main advantage over React Native.

There is no need for any custom or third-party components. One of the main arguments in favor of Flutter over React Native is the latter's seamless connectivity with Google.

React Native makes use of either custom or third-party components. Patchwork effects in the coding are frequently the outcome. It's crucial not to overstate this, though, as the JavaScript development language used by React has a number of benefits of its own. However, if Flutter and React Native are put side by side, Flutter comes out on top.

Code reuse is a hot topic in any comparison between React Native and Flutter. Flutter's codebase is much more reusable in Dart. Developers can reuse the defined functionality by just defining a single UI widget tree. Because of its beautiful user experience, Google's Flutter comes out on top in this comparison.

It comes with some restrictions, but we nevertheless advise it for speedy development. Why? Considering that it isn't always compatible.

Generally speaking, this architecture enables you to develop code once and use it across multiple platforms. However, compatibility across all mobile app platforms isn't always assured; as a result, developers frequently need to load a distinct set of functional components.

These changes may cut into your development time and potentially increase the price of your React Native app. Future versions of the framework, we hope, will address the issue of code reuse.

Flutter includes numerous inbuilt quality-control testing features, just like other Google-developed software. Want to evaluate a specific widget? You may. Would you like to perform integration tests? No issue. These talents are all included. And what's even better is that it offers a tonne of thorough testing documentation.

In this regard, we think its framework is more aesthetically pleasing and in line with 2022's trends.

There are incredibly few built-in unit test features in this framework. Nevertheless, developers may usually close this gap by utilizing outside frameworks like Jest and Detox. Although it is an add-on, integrating it won't be too difficult.

Therefore, it's actually a bit difficult to compare React Native to Flutter in terms of quality assurance.

Flutter will always come up short in a comparison of React Native and Flutter's ecosystem sizes. But don't give up. Its user base of developers is expanding quickly.

In the most favored/wanted category of the 2019 Stack Overflow Developer's Survey, 75.4 percent of respondents expressed interest in the Flutter framework. Developers were interested in React Native to the tune of 62.5 percent. Flutter will become a more popular framework as a result of Google's ongoing investment.

It has been available since 2015 and has become well-known for the simplicity of its JavaScript programming. Today, it has a developer community of over 10,000, a sizable teaching database online, and its own international developer conferences.

It's a tribe, not simply a framework. The distinction between React Native and Flutter is significant.

Flutter consistently outperforms React Native when compared to Release protocols. Why? Because of Flutter's simple release procedure, it will be simple to upload an app to the Google Play or Apple App Store.

Flutter includes official guides for iOS and Android releases as well as quick Lane deployment. And most recently Bitrise declared that Flutter would have out-of-the-box CI support. Even better, Flutter apps may be launched directly from the command line.

The release procedure for this framework is quite standard, which is a plus. The only issue is that everything is done manually. Any deployment that is carried out automatically needs third-party tools. This slows down the rate of development by making the release process much more labor-intensive.

The fact is that there is no indisputably "better" framework than React Native or Flutter. Every project is distinct.  The parameters of the project and the business requirements around it will determine the framework to be used entirely.

In the broadest sense possible, Flutter app developer is preferable for larger apps and apps that require native code. When weighing the advantages and disadvantages of React Native, it should be acknowledged that it is excellent for apps that can take advantage of its plug-and-play components and sizable developer community.

Related Content
Top Reasons Developers should learn flutter 3 for app development
Expo vs Vanilla React Native: What to Choose for Your Project?
Comparison of React native vs Xamarin: Which one is better for developers?
Tags
React Native
Flutter
Blog